This excellent bootable live CD Linux distribution comes from the merger of Whax and Auditor. It boasts a huge variety of Security and Forensics tools and provides a rich development environment. User modularity is emphasized so the distribution can be easily customized by the user to include personal scripts, additional tools, customized kernels, etc. BackTrack is succeeded by Kali Linux. For downloads and more information, visit the BackTrack homepage. 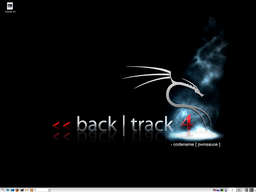 best PenTest OS for my old laptop Kali, Win and other are cruching ;/

BT was good. Kali is better. It has great tools and should be all you ever need, BUT, it is unstable. I wish they would have built it on top of Fedora or CentOS.

Kali is so unstable, I have to do a backup and/or snapshot before I patch. I have had it crater 4 or 5 times in the past 12 months.

Excellent set of tools! For the first few days you'll think you found the FINAL OS solution. Then I discovered that almost all the tools had problems: missing scripts, older unsupported versions, no documentation included. Got metasploit working after updating at the source. Never got the dist to install on a hard disk, USB, or SD card after 28 attempts! (yes I counted them) Was told be tech support that most people only run it from the dist cd. My suggestion is to run this OS to learn about alot of pen-testing tools at once, then add your favorites to your preferred Linux dist. (I did have alot of fun with it ;^)

I have been using BT for the last 3 year. I am on Kali now. No need for any other distro. I usually append ubuntu to apt sources.list. BOBs your uncle. Superb

BT was great, but they have switched gears. Kali Linux http://www.kali.org/ is the new BT.

A conceptually good OS, but not yet completely matured or stable. Needs a better Kernel for itself.

A Good concept, but not matured yet. As per reviews of my peers it is still very unstable and needs a better kernel for itself.

Very nice. I absolutely love this operating system more then anything. Amazing.

Great distro but in no way on earth i was able to get metasploit working properly with it, due to auto pwn and database thing.

Way too buggy and spend all day fixing it and has tons of broken tools. Check out Gh0st_OS made by Gh0std0g it's about 10x better and more stable plus it's foundation is Ubuntu 12.04. you'll thanks me later : )

Best OS I've used. It includes such a vast array of tools to implement, that the sky is the limit with R1 & 2.

Some other distros I use seem to base the whole OS on just one type/genre, and work GREAT with less modding, but if you want it all in just one spot with only a few tweeks needed then BTr2 is it.

Perfect! Now I can't do without it! Once you get used to the modular approach, it comes with ease....

An arsenal of about 350 hacking/reverse-engineering tools in one distro, for free.

Why didn't anyone think of that sooner? No, seriously... why?! Thanks to all contributors for this awesome distro which is still updated on a regular basis and improved greatly.

Great distro! Recommended for penetration tester. It will takes a less time for your job. And it's free and always be.

Nice distro. Good idea. Though way too buggy. Better to use it in a virtual machine.

I got everything I need in this distribution. I like it.

Backtrack 5 is simply too buggy! Recommended if you want to spend your time in patching it.

You can't simply ask for more in one distribution. It has everything!

This on a USB drive has saved me so many times and has also proven as an easy way to hammer the point home when doing a physical penetration test.